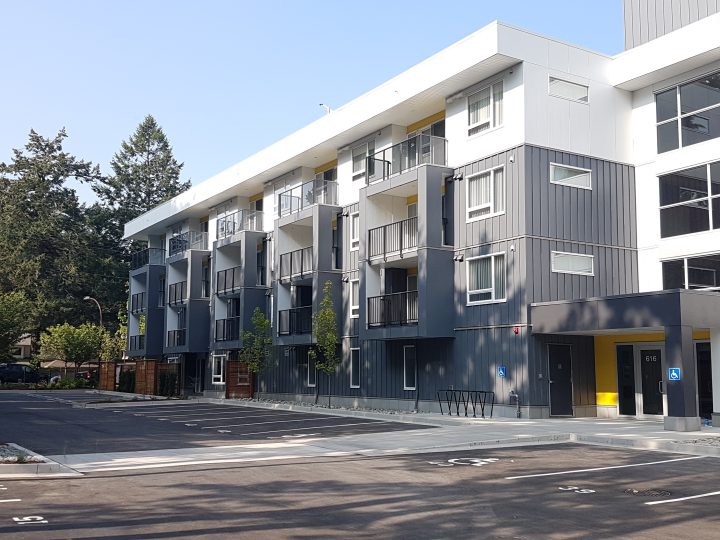 On Friday, Premier John Horgan announced an additional 80 rental units and 36 child-care spaces for Phase 2 of the Oak Park redevelopment in the 600 block of Goldstream Avenue. The child-care facility, to be operated by Atira Women’s Resource Centre, will provide full-time spaces for 12 infants and toddlers and 24 spaces for three-to-five-year-olds.

Seventy-three units, which were part of Phase 1, opened on Friday.

“The housing crisis has left too many people struggling to afford the basics in B.C. communities,” Horgan said.

“These new homes at Oak Park, with new child care spaces on site, are a model of the kind of project we are building throughout the province to address the housing crisis and make life better and more affordable for seniors and families.”

The $8 million in funding for Phase 2 is part of the province’s Building BC: Community Housing Fund. The $1.9-billion fund aims to build more than 14,000 affordable rental homes for middle-income households, seniors and people with low incomes. The first set of projects, announced on Nov. 13, 2018, includes 4,902 homes in 42 communities throughout B.C. to be built over the next two to three years.

Construction of Phase 2 is expected to start before the end of the year. Phase 2 will include replacing the remaining 12 townhouse units with 80 units of affordable rental housing and the child-care facility. The phase is one of 72 projects selected for funding through the Community Housing Fund, which was announced in Budget 2018. Twenty of the projects are on Vancouver Island and the Gulf Islands.

Phase 1 of the redevelopment included replacing 13 townhouse units with a four-storey 73-unit apartment complex. Tenants from the first 13 units moved into neighbouring Pacifica-operated properties. The tenants from the remaining 12 now live in the building built during Phase 1.

Once the entire redevelopment is finished, there will be 153 new affordable rental units. The province has invested $15.5 million in capital costs for the redevelopment including $7.5 million during Phase 1, which was part of the Housing Innovation program.

The City of Langford is contributing $100,000 from its affordable housing fund and $788,065 in municipal reductions. Pacifica Housing is providing the land valued at $3.15 million.