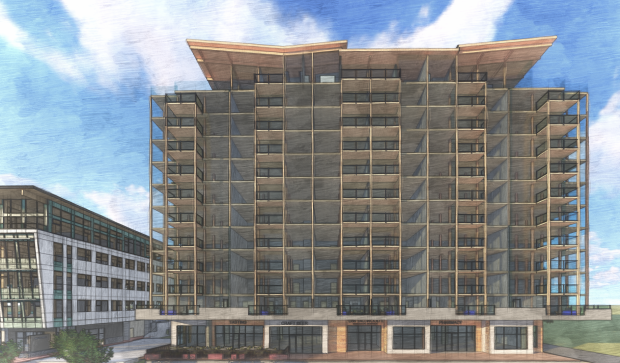 A groundbreaking was held on Wednesday, Oct. 23  for a first-of-its-kind, 12-storey tall wooden mixed-use building in Langford.

Mass timber properties are built using a new construction method that uses primarily B.C. wood. Mass timber buildings can be built faster than traditional steel and cement construction in a process that is described as innovative and safe by the province.

Buildings made using mass timber are prefabricated off-site then assembled at their final destination, making construction faster for crews upon delivery.

Five Vancouver Island communities are among the first in B.C. to adopt mass timber construction technology which allows for buildings as tall as 12 storeys to be built out of wood. Tallwood 1 will be the first to be built under the new agreement.

Matthew McKay, Founder of Design Build Services, says building from mass timbers benefits everyone, even people not living or working in the buildings.

“Building a five-story office building with mass timber has less than a third of the global warming impact when compared with steel and concrete building of the same size,” said McKay.

Earlier this summer, when the development was announced, Langford Mayor Stew Young said he couldn’t have been more excited about the project.

“It puts the forest industry in B.C. back to work,” said Young. “It creates jobs locally and building out of the wood is cheaper than steel construction, so it should make it more affordable for our residents.”

Young went on to say the project fits well with the city’s community plan.

“We want to tighten up our downtown core,” he said. “It’s all about livability and walkability.”

Design Build Services, which is building the development, says the Terminus property will be complete by summer 2020 while Tallwood 1 will be open in late 2021.