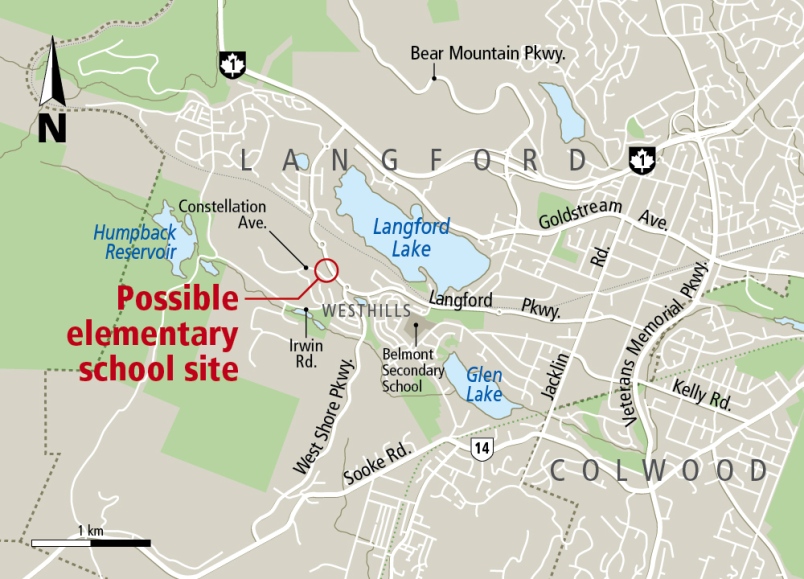 The Sooke school district is taking another step toward adding new schools by clearing a prospective site in the Westhills area. The school district, with close to 11,000 students, is forecast to grow by 300 to 400 students a year over the next decade. Growth is most significant in kindergarten and the secondary grades.

A 6.5-hectare parcel close to the intersection of West Shore Parkway and Constellation Avenue is being cleared. It was purchased for $23.3 million, provided by the provincial government, last December.

It is projected as a site for a 400-seat elementary school and 700-seat middle school. District superintendent Scott Stinson said the proposal for the land was put in place prior to the purchase.

“We’re trying to make sure that we‘re in the best position possible that, if and when we get approval from the [Ministry of Education] and funding from Treasury Board to move to the planning and the build, the site is as ready as it can be,” he said.

Clearing had to be done at this time of year rather than the spring due to concerns for nesting birds. “We have a window around environmental challenges,” Stinson said. “If we delay until spring, then we’re delayed until basically next December.”

Stinson said that Treasury Board has a lot on its plate, including the needs of 59 other school districts in the province, but it is hoped that word about funding will come in the spring.

“We work in partnership with the Ministry of Education and when they feel our proposal is sufficiently ready to go forward, then they’ll take it to the Treasury Board on our behalf.”

The district wants to pursue several other projects. “Our long-range facilities plan looks at property acquisition now before it gets too expensive in the future, as well as new school builds to accommodate growth that we’re seeing across the district,” Stinson said.

He said the middle school in the works will, hopefully, fill the need in the Belmont Zone, which takes in Colwood, Langford and Metchosin

“But we need probably another four elementary schools along the Latoria corridor and in the Sooke area, as well.” A secondary-school site is included in the plans, in addition to Royal Bay and Belmont secondary schools, which opened in 2015.

Also a factor in funding schools is the School Sites Acquisition Charge, which is a charge per dwelling unit that residential developers pay. The money is collected by local governments and transferred to school boards.

In the Sooke school district, it has been some time since the charge has been evaluated. “So we haven’t reviewed and made changes to ours for a number of years,” Stinson said. “And given the growth that we’re experiencing right now, and the expectation on the part of Treasury Board that districts contribute, we feel that we need to move those charges up in order to be able to have enough funding to be able to make our contribution for the sites we need.”