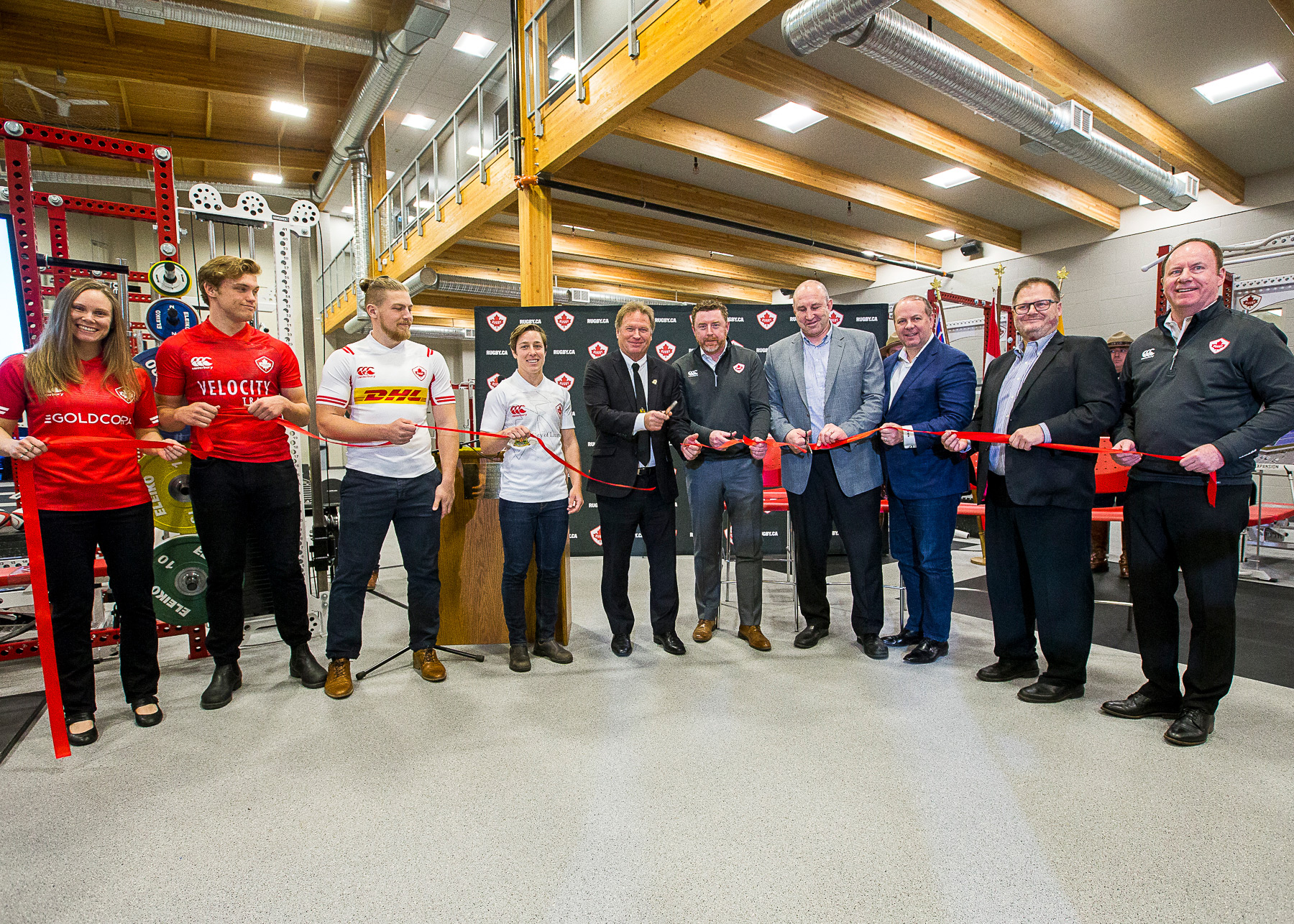 Langford Mayor Stew Young, fifth from left, and rugby legend Al Charron, fourth from right, were among the officials and athletes on hand for Tuesday’s ribbon-cutting ceremony at the Al Charron Rugby Canada National Training Centre in Langford.

View a time lapsed video of the training centre being built.

Rugby Canada realized a long-held dream Tuesday by officially opening a training complex in Langford that rivals any in the country and many around the world.

“This is world class and one of the best gyms in Canada right now,” said Ghislaine Landry, who captains the 2016 Rio Summer Olympics bronze-medallist Canadian women’s sevens team.

“Players are going to walk into this space thinking about what we can accomplish — ideally, a gold medal in 2020 [Tokyo Summer Olympics].”

Planning for the Al Charron Rugby Canada National Training Centre, named after one of Canada’s greatest players, began five years ago. Construction on the site behind Westhills Stadium started 15 months ago.

Funding for the two-storey, 1,900 square-metre training centre came in the form of $2.9 million from the federal government through the Building Canada Fund, $2.5 million in a repayable contribution from the City of Langford and $2.6 million so far in private donations.

The state-of-the-art facility will be used by national team rugby players along with other Olympians and sporting internationals who train in the region.

The facility includes weight, strength and speed training areas, video suites, medical and nutrition areas. Chef services will enable the food intake of the international athletes to be monitored.

The facility is for present and future national-team athletes, added Rugby Canada CEO Allen Vansen: “This is the single-largest investment ever made by Rugby Canada toward keeping our teams competitive on the world stage. We are laser-focused on our current and future athletes.”

An emotional Charron, who had 76 caps and played in four World Cups, was on hand for the opening of his namesake training centre.

“I’m at a loss for words. … This [naming honour] means the world to me, and my late father and mother would be so proud of this,” said the legend, who is in the World Rugby Hall of Fame.

“There are kids in mini rugby and high school now across the country who will be training here. It’s the coolest thing.”

Charron warned the assembled national-team players to be wary of becoming workout warriors: “This facility is fantastic for building speed, endurance, strength and agility. But never forget, it’s what happens on the field that matters most. Wear the Maple Leaf proudly and play with smarts, heart, passion and Canadian pride.”

That was a theme hit on by Langford Mayor Stew Young, who said he envisions an Olympic corridor from Westhills to Bear Mountain.

“These are exciting times in Langford with Rugby Canada here at Westhills and Tennis Canada and Golf Canada, with national training centres on Bear Mountain,” Young said.

Langford’s facilities are complemented by Triathlon Canada’s head office in Victoria and training centre in the region, Rowing Canada at Elk Lake, the Swimming Canada training centre at Saanich Commonwealth Place and the Athletics Canada national middle-distance training facility at the PISE track on the Camosun College Interurban campus.

“It’s something for our kids here to look up to. We can’t go wrong in supporting Canadian athletes on the world stage,” Young said.

“Athletes are our ambassadors. People around the world look up to our athletes. Look at what we did in Pyeongchang [Canada was third in the medals table at the recent 2018 Winter Olympics], and what we did in the Rio Summer Olympics with our women’s sevens team winning bronze.”