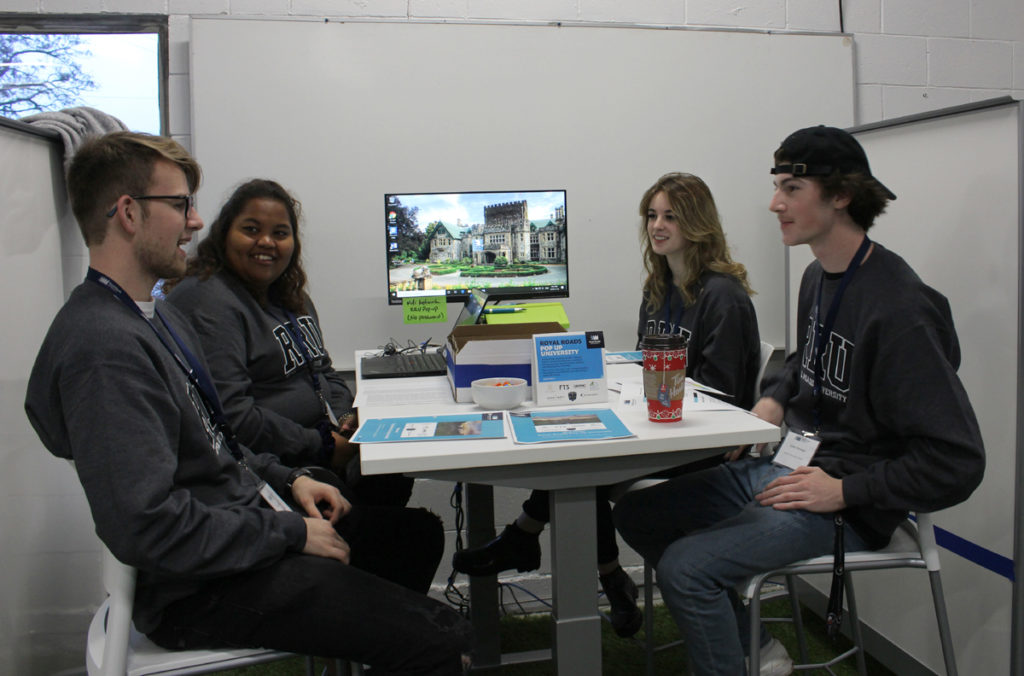 Several areas of benefit will emerge from a one-day pop-up university experience held by Royal Roads University and Sooke School District 62 (SD62) at the old Langford fire hall on Friday November 15 — for the students, the university, the school district, the City of Langford and ultimately the broader community including businesses and residents.

The learning event was launched with speeches from Royal Roads University, SD62 and the City of Langford. The project for the day had to do with studying ways to address the interface of urban communities with forest, also called the ‘wildfire interface’ by fire protection professionals.

Langford Fire Chief Chris Aubrey has been leading the progress of a professional consultant’s study on wildfire interface. The input from students will be exciting for the students and perhaps surface some fresh ideas for the fire service.

Twenty-one students participated — from Belmont Secondary, Royal Bay Secondary, and Edward Milne Community School (EMCS). They worked in groups of about four to six, mingling from the various schools.

“The collaboration between Royal Roads University, City of Langford and SD62, created a tremendous opportunity for some of our high school students to experience a day at the university level,” says SD62 Superintendent Scott Stinson. “The unique design thinking process allowed students to apply their experiences and new learning to a real-world challenge,” he told West Shore Voice News.

The idea for the learning event came forward from RRU. “RRU has proven themselves time and again to be amazing partners,” says Stinson.

Announced in the mix of launching Friday’s studious event was the progress of bringing a university to Langford. The venture is seen as a way to increase the number of SD62 graduates who go on to post-secondary.

It was determined several years ago that the impediments of travel time to other post-secondary in the region (in Saanich and Victoria) as well as the cost to live away from home (either on campus or in independent housing) were considerable enough to prevent more SD62 graduates (from Belmont, Royal Bay and Belmont) to taking that next step to attending university or college.

SD62’s ‘transfer rates’ (students who go directly from high school to post secondary within a year or two) are below the BC average, it was stated by SD62 Vice-Chair Dianna Seaton at the fire hall pop-up event. Also attending from SD62 was Trustee Bob Beckett who is the former Langford fire chief and Belmont Secondary School Principal Jim Lamond.

For over a year now, RRU together with SD62 have been looking at curriculum models that would serve the west shore, supported by input from the City of Langford with regard to situating a university in this growing municipality.

Royal Roads University is situated within Colwood, right next door to Langford; collectively the two municipal areas are often referred to as ‘the west shore’. Broadly speaking, the west shore region can be said to include Langford and Colwood as well as Highlands, Metchosin and Sooke and west of Sooke to Port Renfrew. SD62 serves family with public education in all of those areas.

At present, the RRU curriculum generally addresses specialized areas of study to some degree at the undergrad level but presently more so at the Masters level.

Based on observations led by RRU Vice-President Academic and Provost Steve Grundy, there is room in the post-secondary market for a learning model that fits somewhere between the mainstream academics of the University of Victoria and Camosun College and the RRU high-end specialty model. The new university in Langford could focus on undergrad studies (years 1 to 4 eventually) that address the modern interface of higher education with business and community.

Langford Mayor Stew Young spoke about the upcoming new university that will be situated in Langford. He welcomed all the students and was pleased to announce the new university.

“It’s an important for this day to happen here,” said Mayor Young. ” In dealing with my fire chief, I know it’s a really important topic … to look at our community and the forests we want to protect. How do we best get in there to fight those fires…. that’s a little ask from me,” the mayor said to the 21 students at the event.

“We don’t have enough young kids in this community going on to post secondary. We want to make that an easy transition,” said Young. “We want to work with youth to get ideas for that transition so we can successfully achieve that.”

“We all know what we need to do,” said Young. “But we need to tie into the students.” He explained that the voice of student input helps when he and his Council approach the Premier and the BC Treasury to get the new Langford-based university built. “SD62, that’s who were’re trying to help. I want to see as many kids as we can to get into post secondary education,” said Stew Young to a round of applause.

An announcement about the new university will be made in the next year. “Let’s start talking about it,” said Young. He pointed out that student input helped with locating the new Belmont Secondary School where it is today (opened in September 2015).

Mayor Young told the students that he looks forward to seeing the report on their ideas from their one-day study guided by RRU. “We will definitely incorporate it into the work we’re doing,” he said, referring to the final report that Langford Fire Chief Chris Aubrey will bring to Langford Council and then Council to the BC Government.

Guests from the business and education communities then moved on, and the students got down to work for their detailed agenda until 4:15 pm including research plan, design paradox statements, ideation and prototyping. Top pitches to stakeholders were formulated.