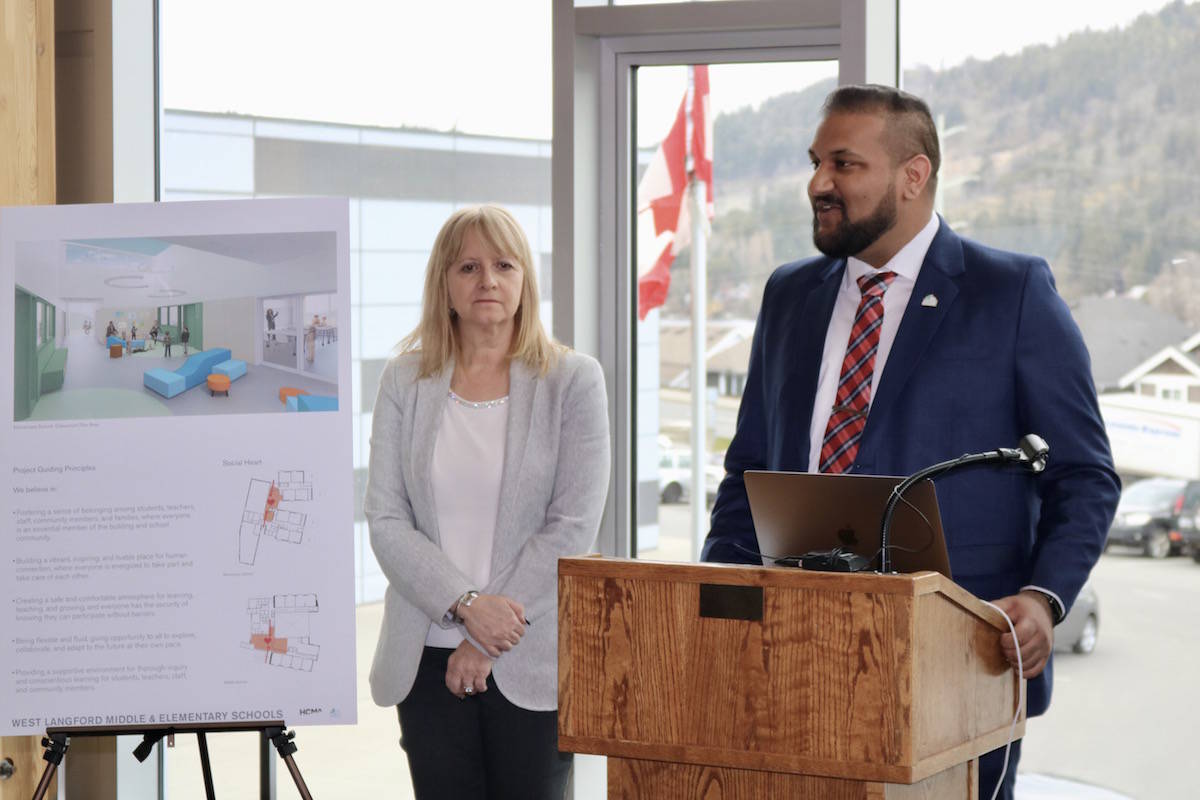 The Sooke School District and province have purchased six acres of land in Langford to serve as a future elementary school site.

British Columbia’s Minister of Education Rob Fleming, Premier John Horgan and SD62 Trustee and Board of Education Chair Ravi Parmar gathered at the south Langford site at Latoria Road and Klahanie Drive on Friday to make the announcement. The land cost the province $7.7 million and another $960,000 was contributed by the school district. A 500-seat elementary school is planned for the area, which will eventually be surrounded by about 400 new homes as part of a new development.

“As more young families decide to raise their children on the West Shore, building and expanding schools here is a top priority for our government,” Horgan said.

Purchasing the land before the surrounding development has been built has kept the cost low for the province and school district, Parmar said during the announcement. In addition, he said the school board will be able to work alongside the developer, Langford’s mayor and council and other partners to design the school and community.

“This is welcome news to the Board of Education, the School District and most importantly families in south Langford. It’s no secret the district is growing,” Parmar said.

Since September 2017, two new schools in Langford and an expansion to Royal Bay Secondary in Colwood have been approved by the province. These schools and the expansion will bring 1,800 new student seats to SD62, one of the fastest-growing school districts in B.C. Three school sites are also in place for future schools in the District, according to the province.

The neighbourhood and new development where the elementary school site will lie has been under contention among south Langford residents in the past, with neighbours worried about the environmental impacts of the development.

Parmar said it is public knowledge that SD62 has been looking at sites along Latoria Road for a new school for a number of years. He said conversations with neighbours who were concerned about the development also included them saying they wanted a school built there if more homes were to be added.

“We’re really excited to be joining the neighbourhood. The biggest challenge is many families that move into homes along Latoria Road and Happy Valley Road may not be able to go to Happy Valley elementary as the school is well over capacity,” Parmar said. “The Board of Education just approved its annual capital plan and building a school on the site in south Langford is the number one priority now.”

Working alongside the City and developer, Parmar said the district will look at forming shared recreational spaces, child care opportunities and community arts and culture spaces as well as safe routes to school for children.

As for the two new schools in west Langford, the province said blasting and site preparations have already begun. PEXSISEN Elementary will have a 500-student capacity and Centre Mountain LELLUM Middle School will have a 700-student capacity. Both schools are scheduled to open in September 2022.

Portables that were in place at Royal Bay Secondary have also been moved to other schools in the district as the 600-seat expansion there nears completion. According to a tweet from Parmar, the site that housed the portables will be transformed into parking spots to deal with the influx of students and a new bus loop will be constructed to separate buses and vehicles. The expanded Royal Bay Secondary is set to open in September.